NEW PROJECTIONS OF MORTALITY AND CAUSES OF DEATH TO YEAR 2060

Back in 2006, I published a paper in PLoS Medicine with detailed projections of deaths by age, sex and cause for all regions of the world, from year 2002 to 2030 (https://journals.plos.org/plosmedicine/article?id=10.1371/journal.pmed.0030442).  That paper has proved very popular, with over 9000 citations to date.  I’ve updated these projections to most recent WHO baseline estimates several times, and following the release of the latest update of causes of death for year 2016 by WHO earlier this year (http://www.who.int/healthinfo/global_burden_disease/estimates/en/), I have done another update, extending the projections for the first time beyond 2030 to 2060.

This has now been released by WHO on its website at http://www.who.int/healthinfo/global_burden_disease/projections/en/ where regional and global projections can be downloaded in spreadsheet form, along with a methods note. Apart from synchronising the new projections with the 2016 cause of death estimates, the cause-specific trends in the near term are synchronized with estimated recent trends over the last 10 to 15 years. In the longer term, broad trends are largely driven by projection equations which model the epidemiological transition from infectious to non-communicable diseases in terms of projections of average income per capita, average years of education, time, and for some causes also projections of smoking impact.

At the global level, age-standardized death rates for most important causes are falling with time, faster in most cases for infectious, maternal and perinatal causes than for non-communicable diseases (see figures below). The main exceptions are for diabetes, breast cancer and road injuries. The specific projection model for diabetes is based on projections of the prevalence of overweight and obesity and that for road injury is based on projections of vehicles per capita with continued economic development. 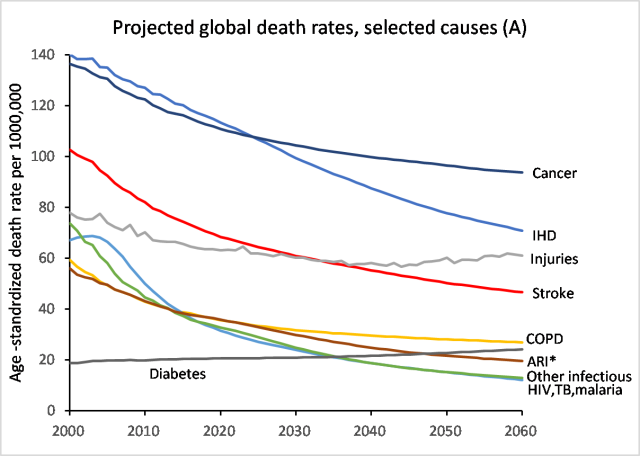 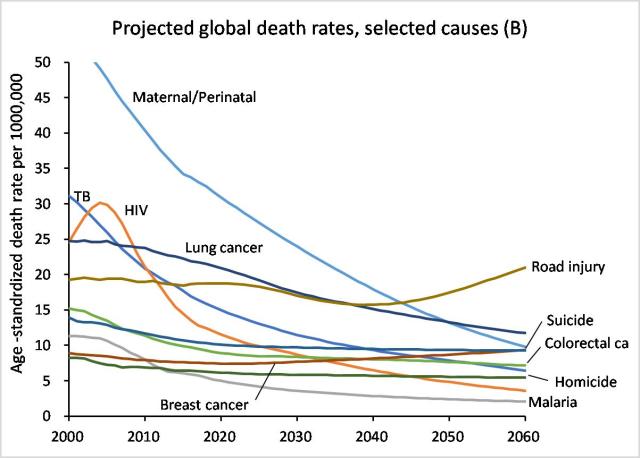 However, for many of these causes, the total projected deaths are rising with time because of population growth and ageing. Only the relatively fast declining infectious, maternal and perinatal causes are likely to also have declining total numbers of deaths (see the following two figures). 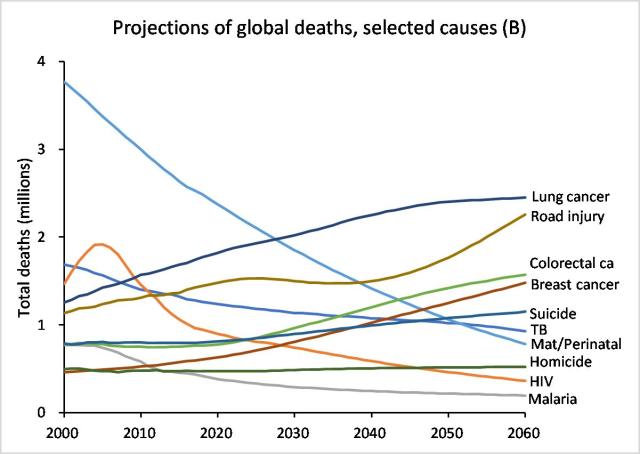 The projections of deaths by cause are not intended as forecasts of what will happen in the future but as projections of current and past trends, based on certain explicit assumptions. The methods used base the disease burden projections largely on broad mortality projections driven by projections of future growth in income and increases in human capital in different regions of the world, together with a model relating these to cause-specific mortality trends based on the historical observations in countries with death registration data over the last 60 years. The results depend strongly on the assumption that future mortality trends in poor countries will have a similar relationship to economic and social development as has occurred in the higher income countries. If governments give increased priority and resources to achievement of the Sustainable Development Goals by the year 2030 and progress towards Universal Health Coverage with the most relevant cost-effective interventions, it is entirely possible and certainly to be hoped that future declines in mortality for many causes will be faster than these business-as-usual projections.  On the other hand, if economic growth in low income countries is lower than the forecasts used here, and global warming results in additional adverse impacts on economic and social development, then the world may achieve slower progress and widening of health inequalities.

Despite these uncertainties, projections provide a useful perspective on sustainable health trends and health policies, provided that they are interpreted with a degree of caution. Projections enable us to appreciate better the implications for health and health policy of currently observed trends, and the likely impact of fairly certain future trends, such as the ageing of the population, and the continuation of the epidemiological transition in developing countries. 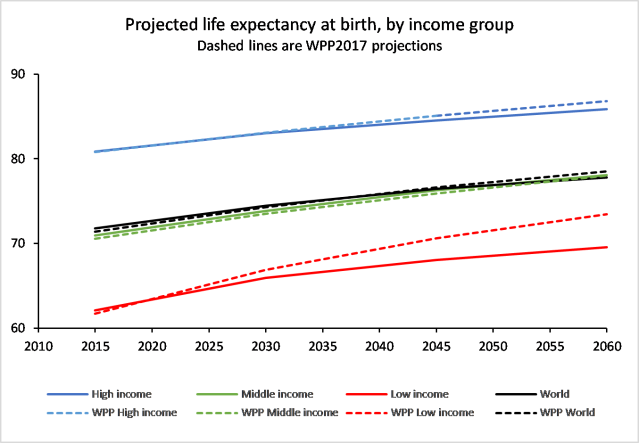 These updated projections have drawn heavily on WHO official statistics, and data sets and analyses carried out by my former colleagues in WHO, as well as collaborators in other UN agencies and universities. The development of some of the modelling approaches has benefited from discussions with Majid Ezzati, Vasilis Kontis, Margie Peden, Gretchen Stevens and Dan Hogan.