Maternal mortality has been almost halved in the last 25 years.

These also represent our final assessment of country, regional and global achievement (or not) of the Millenium Development Goal to reduce maternal mortality by 75% between 1990 and 2015. The map below shows estimated maternal mortality rates per 100,000 live births (MMR) in 2015.

Maternal deaths around the world dropped from about 532,000 in 1990 to an estimated 303,000 this year, a 44% drop. This equates to an estimated global maternal mortality ratio (MMR) of 216 maternal deaths per 100 000 live births, down from 385 in 1990. This almost halving of the risk of dying from pregnancy-related causes represents a real achievement for the world, although the goal was not reached.

The UN has established ambitious new Sustainable Development Goals for the year 2030, which includes an ambitious target to “end preventable maternal deaths” by reducing maternal deaths to fewer than 70 per 100,000 live births globally, with no country having a rate higher than 140. This is ambitious given that maternal mortality rates remain over 700 per 100,000 in middle and west Africa, and over 1000 in a number of countries. But most of these deaths are entirely preventable!

Based on point estimates, only 17 of the 194 WHO Member States achieved that goal: Belarus, Bhutan, Cambodia, Cabo Verde, Estonia, Iran, Kazakhstan, Laos, Lebanon, Libya, Maldives, Mongolia, Poland, Romania, Rwanda, Timor-Leste and Turkey. Despite this important progress, the MMR in some of these countries remains higher than the global average.

For the 95 countries with high maternal mortality in 1990 (>100 per 100,000 live births), the paper assessed country progress in four categories shown in the graph below. Only 9 of these countries achieved the MDG goal, and for 26 countries the chance that the MMR decreased is less than 90% or the point estimate of the country-specific decline is less than 25%. 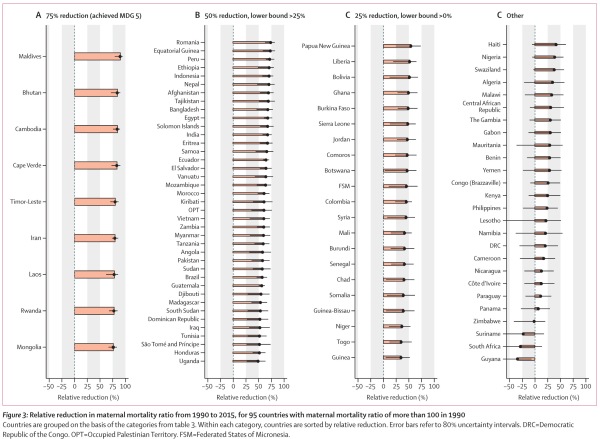 Despite global improvements, only 9 countries achieved the MDG 5 target of reducing thematernal mortality ratio by at least 75% between 1990 and 2015. Those countries are Bhutan, Cabo Verde, Cambodia, Iran, Lao People’s Democratic Republic, Maldives, Mongolia, Rwanda and Timor-Leste. Despite this important progress, the MMR in some of these countries remains higher than the global average.

By the end of this year, about 99% of the world’s maternal deaths will have occurred in developing regions, with Sub-Saharan Africa alone accounting for 2 in 3 (66%) deaths. But that represents a major improvement: Sub-Saharan Africa saw nearly 45% decrease in MMR, from 987 to 546 per 100 000 live births between 1990 and 2015.

WHO carries out a consultation with member States before releasing any statistics relating to population health outcomes at country level. We anticipated much greater interest and concern from our Member States for the consultations on the MDG targets for maternal and child health this year, as it is the target year for the MDGs and we and the UN are reporting on final achievement of the targets. However, the level of controversy about the maternal mortality estimates was substantially greater than we anticipated and much greater than for child mortality or other MDG health indicators.

We had carried out some revisions to methods to address concerns expressed by countries in previous consultations. These revisions allowed us to take better account of the trends in country data in assessing time trends. We had seen more and better data coming from countries, enhancing the accuracy of the absolute numbers of maternal deaths reported, and we were able to reduce our reliance on covariate predictors of maternal mortality for many countries. Additionally, we eliminated a classification of countries into four groups based on types of data available, which resulted in a somewhat artificial change of methods across groups.

We were aware that revisions to methods in the final year of the MDG period could be controversial, but the improvements were so substantial that it was necessary. In the event, there were a number of countries where non-technical people objected strenuously to the revisions and demanded that the older methods be applied, even though these resulted in worse trends for many of these countries. In collaboration with WHO Regional Offices, we held consultation meetings with countries and were able to convince them that the revisions resulted in “better” and generally more favourable assessments, but in any case assessments that reflected better the trends in the country data.

Even in countries with high maternal mortality, a maternal death is a relatively rare event compared to child deaths, and there are much more substantial limitations in the completeness of data. For example, for countries relying on survey reporting of deaths of sisters, the respondent may not be aware that the sister was pregnant at the time of death, and deaths associated with unsafe abortion may not be known or reported. There are particular problems in countries with high HIV prevalence to decide whether the maternal death of an HIV-positive woman is a maternal death “aggravated by the HIV status” or is an HIV-death, to which the pregnancy was incidental. Additionally, there is typically significant under-reporting in surveys of sibling deaths or deaths in household, generally for all causes of death.

Even for countries with medically certified causes of death and complete death registration, confidential enquiries and studies show that there is substantial under-identification of deaths on death certificates. On average, across all such studies there is a 33% under-reporting rate. The UN Interagency Group applies an adjustment factor based on country studies even for countries with high quality death registration systems such as Australia or France.

The UN method starts with data on the proportion of all deaths which are maternal (PM) derived from death registration data or survey data on deaths in the reproductive age range 15-49 years. PM is used rather than number of maternal deaths to deal with incomplete recording of deaths in death registration systems and under-reporting of deaths in surveys and censuses, on the assumption that the reporting biases are the same for maternal and non-maternal deaths.

The MMR is then calculated as

where total deaths and total live births are derived from WHO/UN assessments of total death rates, population numbers and live birth rates. All of these may differ from country assessment of the same quantities.

As a result, the UN estimates of MMR may differ from official country estimates and from the MMR estimates reported in survey and census reports derived directly from reported data without adjustments. For all these reasons, many countries express concern about the UN estimates, and considerable communication and discussion is sometimes needed to ensure that the reasons for these differences are understood and hopefully accepted. The discussion process also often results in provision of additional data and information on data quality which improves the accuracy of estimates. For some countries, who have introduced high quality real-time surveillance systems for maternal deaths, there is now complete agreement between country and UN estimates for MMR. Since 2012, WHO, UNFPA and partners have developed Maternal Death Surveillance and Response for identification and timely notification of all maternal deaths, followed by review of their causes and the best methods of prevention. An increasing number of low- and middle-income countries are now implementing this approach.