The long-term decline of violence and global homicide rates

I have just finished reading Steven Pinker’s book “ The Better Angels of our Nature: why violence has declined”. This very large book (802 pages) is an ambitious and serious attempt to show that violence in all its forms (nonfatal, homicide, conflict, genocide, etc) has in fact declined dramatically over a very long stretches of history. Despite the ceaseless news about war, crime and terrorism, and the horrific events occurring now in Iraq, Syria, Gaza, Ukraine and elsewere, Pinker provides convincing evidence that there has been an intermittent but progressive decline in violence from prehistoric societies through to the present.

The figure below from his book illustrates this. It shows the decline in homicide rates in England over an 800 year period from 1200 to 2000. The solid black line is data for the town of Kent and the solid grey line is from national homicide data, compiled since the early 19th century. The scale is logarithmic, there has been a more than 10-fold decline in homicide rates from around 10-50 per 100,000 in the 13th century to around 0.8 per 100,000 in the mid 1950s.

Another figure from the book presents averaged data for Western Europe as a whole together with an average of data from non-state societies (prehistoric archaeological data, plus data from hunter gather and tribal societies). The non-state average is 524 per 100,000 or about 0.5%. This is 500 times higher than the current European average homicide rate of around 1 per 100,000. 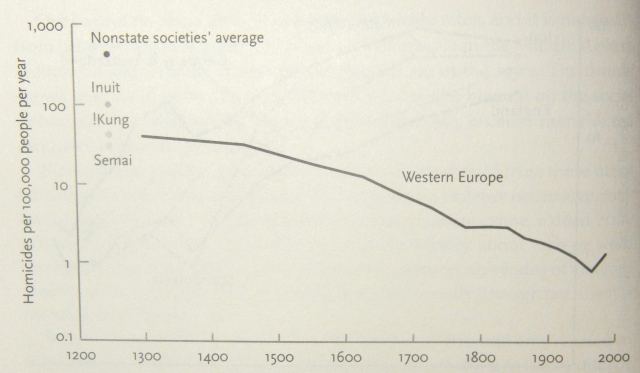 Pinker examines potential explanations for this decline in violence, also drawing on contemporary variations across cultures and regions. He argues that the long decline in violence is associated with the rise of the state (which explicitly claims a monopoly on violence), along with the rise of trade and the rule of law, as well as the civilizing process (the increase in literacy and education, the increasing importance of self-control, manners and social amity, the humanitarianism of the Enlightenment and subsequent reform movements) and in the 20th century the “Rights Revolution” that has brought widespread acceptance of religious and ethnic minorities, women, and homosexuals. Pinker makes the important point that while the 20th century saw great violence with the tremendous crimes committed by totalitarian states and the huge casulties of WWI and WWII, on a per capita basis, there is continued decline which has accelerated in the post-WWII era.

I am not going to attempt to summarize these arguments or the evidence for them. Read the book!

Earlier this year, my team released estimates of deaths by cause for years 2000-2012 for all WHO Member States (www.who.int/evidence/bod or www.who.int/gho). This included estimates for homicides (numbers and rates) based on data from national death registration systems, estimates for countries without death registration data from the IHME Global Burden of Disease 2010 study (http://www.healthdata.org/gbd ), and data from national police and justice systems databases collected by UNODC for its 2013 Global Study on Homicide (http://www.unodc.org/gsh/en/data.html ). The table below shows the 15 countries with the highest homicide rates in the world in 2012. Eleven of these countries are in Latin America and the Caribbean, the other four in Africa. The second table show the 15 countries with the lowest homicide rates in the world. Japan has the lowest rate at 0.33 per 100,000, and 10 of the 15 countries are in Europe, with rates below 0.8 per 100,000. 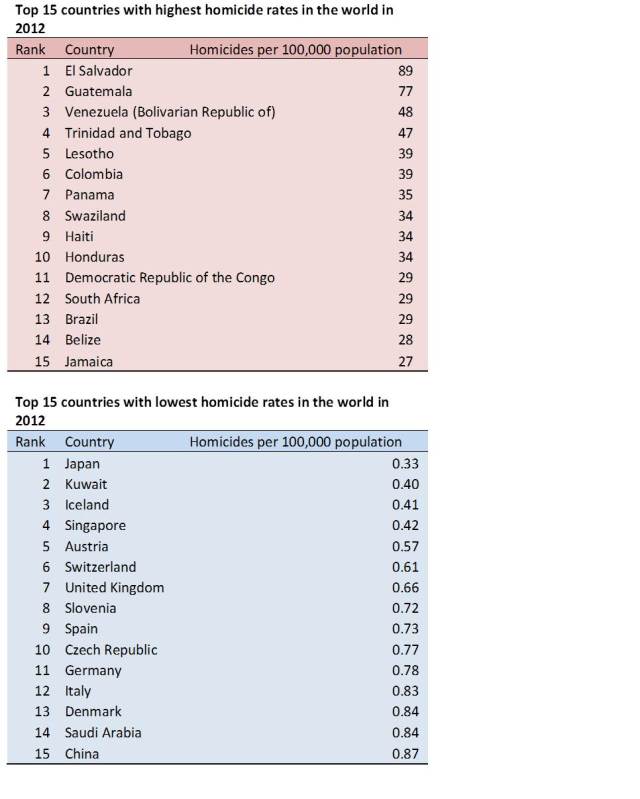 My team is currently working with the Violence and Injury Prevention Department to update these estimates, improving the modelling and drawing on a survey of Member States which has collected more extensive police and justice system data on homicides. This report is expected to be released early next year.