In an earlier post, I summarized trends in religiosity (practicing, non-practicing, non-religious and atheist) for countries in the World Values Survey (WVS) and European Values Study (EVS) from 1980 to 2020 [1-4]. In this post, I take a closer look at whether religious values are changing in the direction of increasing or decreasing fundamentalism and the extent to which religion and/or culture are associated with rejection of scientific evidence and findings: important questions for a world facing the twin global crises of climate change and the coronavirus pandemic.

Most religions developed in the pre-modern era and their sacred texts and teachings incorporate pre-modern culture and values to varying extents. Peter Herriot has written extensively on fundamentalist religious beliefs, characterized these movements as attempts to return to the pre-modern origins of their faith as prescribed by their sacred books [5]. He identifies five main general characteristics of fundamentalist religious movements:

Other common characteristics include prejudice towards minorities and authoritarian aggression – in some cases resorting to violence. Fundamentalist groups may be mainly religious in focus, or the religious element may be strongly associated with nationalism or ethnic identity. Fundamentalists seek to erase the distinction between secular and sacred and impose their form of religious beliefs on all through political action or authoritarian control. In the 21st century, the mobilization of the fundamentalist vote in the USA has been an important contributor to the election of the two most recent Republican presidents, and we now see a bizarre situation in the USA where the fundamentalists strongly support an amoral President with severe narcissistic personality disorder.

Herriot perceives fundamentalist movements around the world and in all major religions as having arisen relatively recently in the twentieth century as a reaction to modernity [5] and sees them largely as subgroups within the overall religion. I disagree with this.  Some religions which have not gone through a Reformation process involving separation of church and state remain largely embedded in pre-modern beliefs and values. In other cases, as religious institutions have evolved along with modern science, technology, culture and moral values, subgroups have rejected this evolution as going further than their moral comfort zone. Rather than attempt to define “fundamentalist” values, I’ve sought rather to identify WVS/EVS questions that relate to “pre-modern” values associated with earlier stages of moral development (as defined by work of Piaget [6], Kohlberg [7] and Gilligan [8]. Gebser [9] and Wilber [10] have elaborated the link between these stages of individual development and the broad evolution of cultures over the course of human evolution through magic, mythic, rational, to integral stages. Wilber also refers to the mindsets associated with the three broad stages of moral values as egocentric, ethnocentric and worldcentric [11]. As moral values evolve through the three broad stages, the size of the in-group (“us”) with which an individual identifies typically expands from tribe to ethnic group or nation to all humanity.

Pre-modern moral values and related religious values focus on absolute rules, obedience and punishment and an individual is good in order to avoid being punished. In stage 2, the individual internalizes the moral standards of the culture and is good in order to be seen as a good person by oneself and others. Moral reasoning is based on the culture’s standards, individual rights and justice. In stage 3, the individual becomes aware that while rules and laws may exist for the greater good, they may not be applicable in specific circumstances. Issues are not black and white, and the individual develops their own set of moral standards based in universal rights and responsibilities.

Because pre-modern religious teaching is expressed and interpreted in mythic terms, it may appear to conflict with scientific understanding of the natural world. A person with pre-modern values may thus reject scientific findings,  whereas another with modern values will understand that the myths communicate aspects of the human condition, but are not to be interpreted literally, and that the domain of religion relates to meaning, values, ethics, and does not generally conflict with the domain of science.

I reviewed questions included in the WVS and EVS to identify those (a) most relevant to distinguishing pre-modern and modern moral values and (b) widely available in the survey waves. The selected questions are summarized in the following table:

The availability of these questions in the WVS and EVS waves is summarized in the following figure. Responses for belief in heaven and hell were imputed as for belief in God (documented in the previous post). The responses for belief in life after death were very similar to those for belief in heaven, and only the latter variable has been used. Other potential questions relating to religious values and beliefs were included in either the WVS or EVS but not both and have not been further considered here. A set of questions on levels of trust in those with other religions, from the local region, and from the same country is available for all recent waves of EVS and WVS, as are questions of sense of belonging to local community, nation and world. However, these questions showed little association with variations in religious values and beliefs, or with culture zone, and were not included in further analysis. Similarly, high levels of disagreement that education was more important for boys was found for all culture zones and religions. Gender equality values were thus based on responses for jobs and political leadership.

To assess how responses to these questions varied across culture zones for practicing religious people compared to others (non-practicing religious, non-religious and atheists), I calculated the per cent of respondents who agreed with the question proposition. For example, for questions with a 10 point response scale, responses 5 and 6 tended to have somewhat higher response rates than others except the question end-points, and I treated the middle categories as sitting on the fence. Hence, the proportion who “agreed” were those who responded 1-4.  The following plots show the differences between the practicing religious and others for the 9 culture zones that I’ve used to group countries in the previous post (see footnote d of that post).

The final plot shows differences in the proportions of people who believe that sex before marriage is not justifiable. It could be argued that this and other issues of sexual freedom are also associated with the pre-modern values of the era when high fertility was important to ensure some children survived to reproductive age, and societies thus discouraged divorce, abortion, homosexuality. But given how recently the demographic transition to low child mortality, low fertility and widespread availability of reliable contraception has occurred, and is in some regions still occurring, and how rapidly values are changing in this domain, I have not included measures of sexual freedom or emancipation in the potential measures for pre-modern/modern values. Because the questions of citizenship and belonging did not show much variation between groups, I have instead relied on questions about gender discrimination and non-acceptance of homosexuality as measures of inclusiveness and acceptance of others.

Estimation of a continuous latent variable for pre-modern/modern values

Based on the above exploration of potential indicators of pre-modern religious values, I constructed a continuous latent variable based on the categorical responses to 12 questions. These questions are shown in the following plot, which shows their item response cut-points on the estimated latent variable. The item response analysis [12, 13] was implemented as an ordered probit model using the stata procedure gsem for generalized structural equation models [14]. The model was fit to the entire dataset for all countries in survey waves 5 to 7. 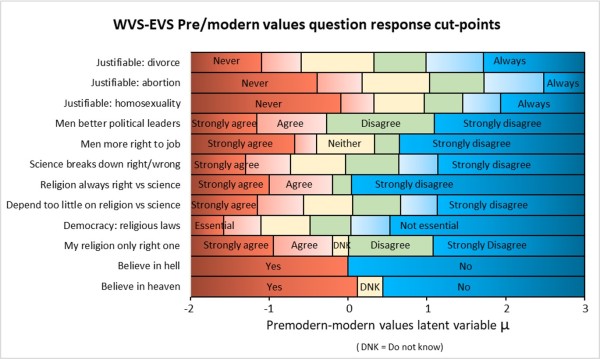 For ease of presentation, I made a linear transformation of the estimated latent variable by multiplying it by 5 and adding 4.75. This resulted in average religiosity  at country level ranging from -4.6 in Nigeria in 2000 to 4.71 in China in 1990. Note that higher values denote higher prevalence of modern religious values. Country averages for the most recent WVS/EVS wave for 2017-2020 ranged from 0.2 for Pakistan to 9.9 for Denmark, followed by 9.8 for Sweden and 9.3 for Norway. At individual level, 90% of values of the pre-modern -modern values latent variable fall in the range –0.24 to 10.16 with a median value of 4.71. 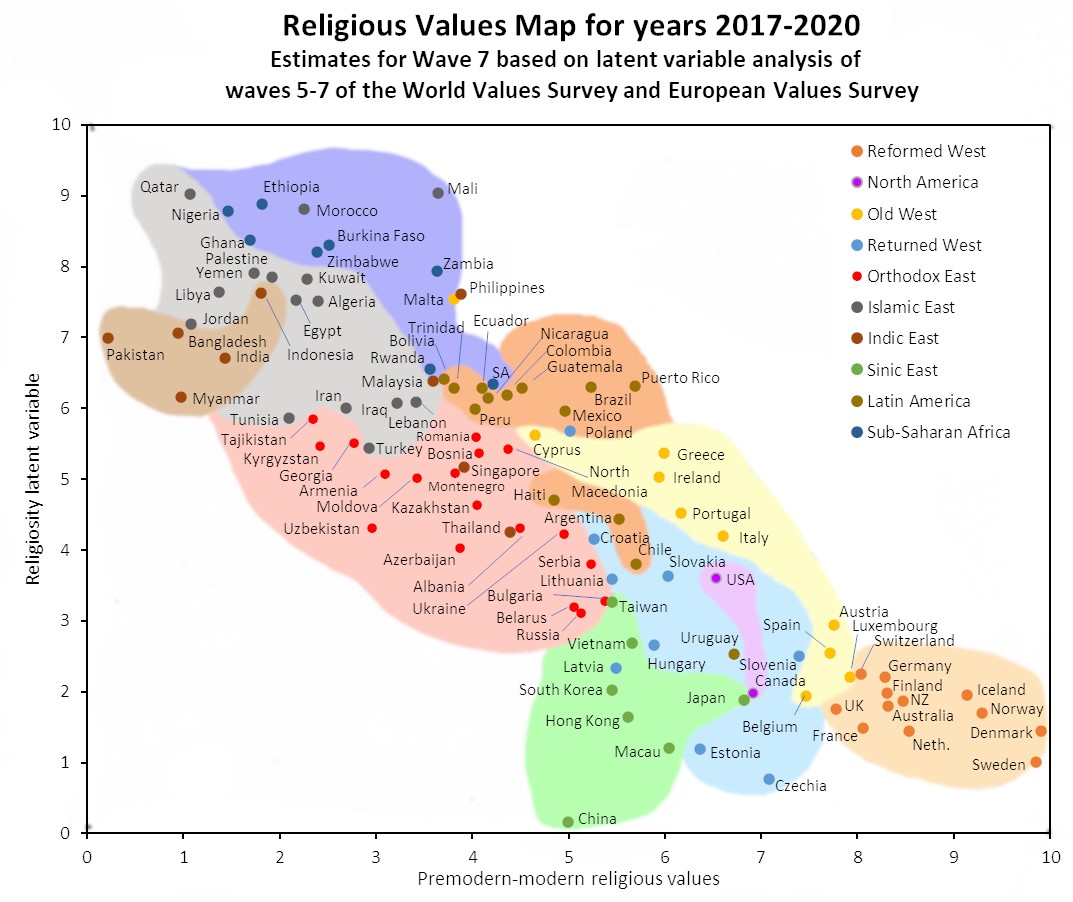 The following plot shows culture zone population-weighted averages for the two latent variable for four categories of religiosity. This plot relates to averages for wave 7 only.

These plots, and the country or culture zone comparisons show broad patterns but specific small differences should not be over-interpreted. I have not attempted to estimate uncertainty ranges for these statistics because my long experience with analysis of surveys implemented in many countries by different study teams has shown that the most important contributors to uncertainty of statistics is not the survey sample size or sampling issues but other less quantifiable differences in survey implementation, design and translation. Also important are difficult to quantify differences in interpretation and choice of question response categories in different populations. Most of the WVS/EVS surveys are representative samples of adults with sample size ranging between 1 and 2 thousand.  This is quite similar to the typical national opinion poll where uncertainty of statistics is typically around 2 or 3 percentage points.

There are a substantial number of countries where the WVS and EVS both conducted a survey in the same wave. I’ve assessed the median difference between the two surveys for a country to provide some quantification of the typical variation induced by sampling methodology, survey design and implementation. It will not include cross-national differential response associated with language, translation and response category cut-point shifts.

For the religiosity categories at country-level, average prevalences differ by around a median 10% (relative difference). This drops to around 5% at culture zone level.