A Covid Performance Index for countries

An Australian think-tank, the Lowy Institute has produced a Covid Performance Index and used it to examine the impact of geography, political systems, economic development and population size on the Covid-19 outcomes around the world.

The COVID Performance Index compiled by the Lowy Institute ranked 98 countries’ handling of the COVID-19 outbreak, finding New Zealand performed the best while Australia sits in eighth place. Switzerland was ranked 53rd of the 98 countries, the UK 66th and the USA was in the bottom five, one rank ahead of Iran at 95th. 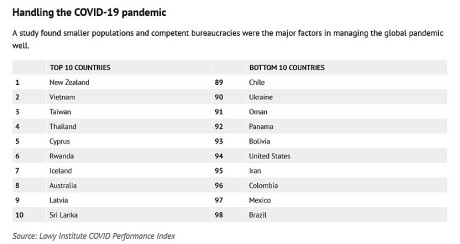 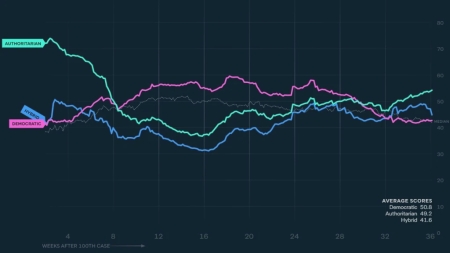 Democracies have performed slightly better over the course of the pandemic.Credit:Lowy Institute

Democracies slightly outperformed authoritarian countries in suppressing the coronavirus, overall. While the Asia-Pacific region performed best on average, the study did not include China due to lack of complete information on testing rates. While democracies performed worse at the beginning of the pandemic and there were some notable exceptions including the United States and Britain, they pulled ahead of authoritarian and hybrid states as the outbreak worsened, which suggests democracies were better at learning from their mistakes in acting too slowly. Europe showed the greatest improvement over time, before succumbing to a more severe second wave in final months of 2020.  The more open borders in Europe left countries vulnerable to renewed outbreaks in neighbouring countries.

Comparison of the experience of the UK and USA with other high income countries suggests that the determining factor in how effectively countries responded to the crisis was whether citizens trust their leaders and whether there are competent and effective state bureaucracies and leaders that rely on scientific advice.

Synthetic indices like this that aggregate disparate indicators numerically are quite commonly used to compare countries and track progress (eg. The Human Development Index which averages life expectancy, mean years of schooling and average income per capita). The drawbacks of such indicators is that the resulting numbers are not directly interpretable in the same way that single outcome indicators are, and the results are dependent on a number of essentially arbitrary choices in the indicators chosen and how they are weighted and averaged. Having been involved all my career with summary measures of health, I would have a similar preference for identifying a single explicit outcome measure for a pandemic and using that to compare performance.

The Lowy Institute index is based on two absolute measures (cases, deaths) and four “rates”. This gives a certain weight to absolute measures of the pandemic impact as well as measures adjusted for population size and testing rates. I’m in two minds about whether this is reasonable. On the one hand, the inclusion of absolute measures may partly or largely account for why smaller countries generally did better. On the other hand, the absolute impact of disasters in terms of lives lost or lost health is also an important outcome. There is probably no “right” choice, but I’m not sure whether the implied weights of the Lowy Index are necessarily a good choice.