Posted on September 18, 2014 by colinmathers 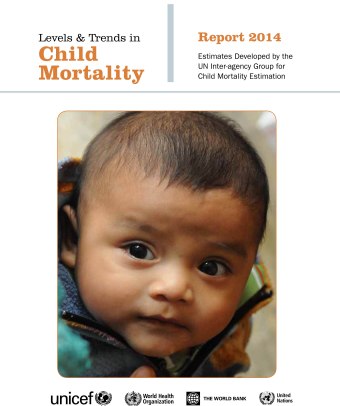 The United Nations Inter-agency Group for Child Mortality Estimation (UN-IGME) released new data this week showing that under-five mortality rates have dropped by 49% between 1990 and 2013. The average annual reduction has accelerated – in some countries it has even tripled – but overall progress is still short of meeting the global target of a two-thirds decrease in under-five mortality by 2015.

UNICEF also released a companion report, A Promise Renewed, which included the most recent estimates of causes of child death across the world, prepared by my team in collaboration with several academic groups. The full results on causes will be released later this month.

The new estimates show that in 2013, 6.3 million children under five died from mostly preventable causes, half the number in 1990, but still equal to nearly 17 000 child deaths each day. About 44% of these under-five deaths occur in the first month of life and about two-thirds of these in just 10 countries.

While Sub-Saharan Africa has cut under-five mortality rates by 48% since 1990, it still has the world’s highest rate – 92 deaths per 1000 live births – nearly 15 times the average in high-income countries. The leading causes of under-five deaths are pre-term birth complications (17%); pneumonia (15%); complications during labour and delivery (11%); diarrhoea (9%); and malaria (7%). Under-nutrition contributes to nearly half of all under-five deaths.