Are countries on track to meet the global targets for noncommunicable diseases?

Posted on September 21, 2018 by colinmathers

More than half of all countries are predicted to fail to reach the UN target to reduce premature deaths from cancers, cardiovascular disease, chronic respiratory disease, and diabetes by 2030, according to a new analysis published by the NCD Countdown 2030 collaborators in The Lancet ahead of the third UN High-Level Meeting on NCDs commencing on 27 September 2018. WHO is a member of the Countdown 2030 and the paper makes use of the most recent WHO estimates for causes of death released by my Unit earlier this year.

Cancers, cardiovascular diseases, chronic respiratory diseases, and diabetes were responsible for 12.5 million deaths among people aged 30-70 years worldwide in 2016. The following figure from the paper shows the of dying between ages 30 and 70 from these four non-communicable disease groups (referred to below as NCD4) for men and women. 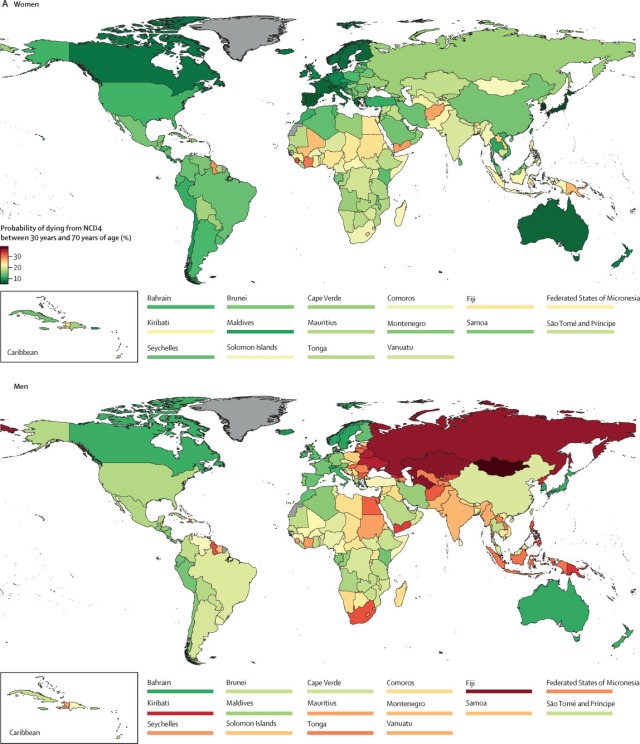 The paper warns that more than half of all countries are not on track to achieve a UN target for year 2030 to reduce by a third the probability of dying between ages 30 and 70 from NCD4. The maps below show the years at which countries will achieve the UN Target if current trends continue.

One in 10 countries have seen death rates stagnate or worsen – for instance in the USA, NCD rates for women have stagnated, with almost one in eight 30 year old women dying from one of the four NCDS before their 70th birthday, compared with 1 in 20 women in the best performing country (South Korea). 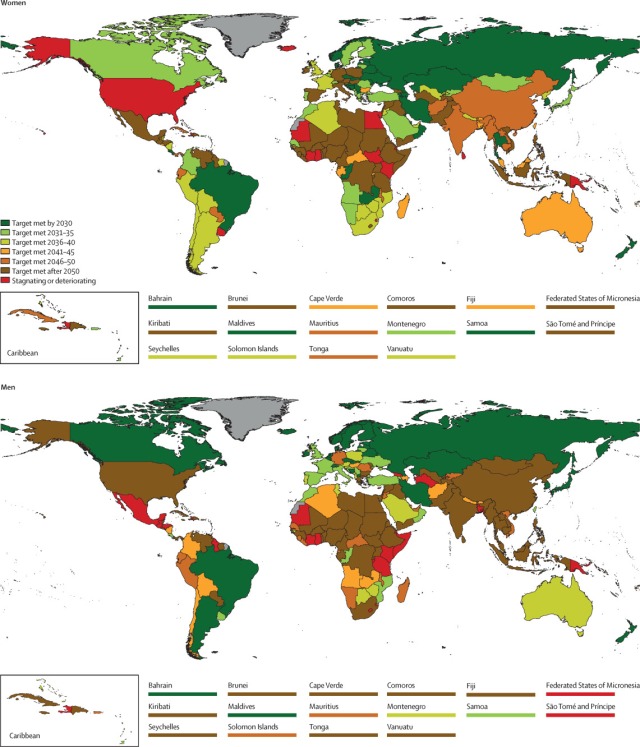 Back around 2013-2014, when indicators and targets for 2030 were under discussion within UN agencies, a WHO expert group proposed that the NCD mortality indicator be chosen as the probability of dying between exact ages 30 and 70 if the cohort was subject only to the current age-sex-specific mortality rates for the NCD4 causes observed in each population.  This is a life table concept and is calculated using a life table where the mortality rates are those for NCD4 only.  Demographers refer to this indicator as an “unconditional” probability of dying from the specified causes.  If other causes, “competing” causes are also included in the mortality risk, then the probabilities become dependent on other causes as well as NCD4 and hence are “conditional”.

To see this, consider a population in which 50% of the men die between ages 30 and 40 from HIV. If competing causes are not excluded from the calculation, the risk of dying between 30 and 70 from NCD4 will be approximately half that for an identical population where there is no HIV mortality.

This indicator was chosen because it provides numbers that are immediately understandable by policy makers and the general public. It is quite easy to understand what it means to say that 10% or 30% of 30 year olds can expect to die from NCD4 by age 70, if nothing else kills them. In contrast, the numbers associated with the more tradional age-specific or age-standardized death rate indicators are not immediately meaningful to policy makers or the general public.  Is a death rate of 250 per 100,000 population aged 30-69 a desirable or undesirable level?

However, in WHO consultations with Member States and more generally, it turned out that this indicator has been an endless source of confusion for many.  It seems that life table concepts are not familiar to many epidemiologists and public health professionals, and the issues around “competing causes” has also been a source of much confusion. We discovered that the term “unconditional” is used in several different senses, and is generally not interpreted the way demographers use it.  Also, a number of epidemiologists have argued that exclusion of other causes is resulting in bias, rather than being necessary to produce an indicator which is influenced only by NCD mortality level s. So WHO has ceased to use the term “unconditional” and learned to live with the NCD target being described in terms of “death rates”, “premature death rates”, or even numbers of deaths. The indicator being used however is clearly defined as a life table probability in technical descriptions of the indicator.