Covid-19: which countries are succeeding and not succeeding?

There is now sufficient data on social distancing, lockdown, and other measures that researchers are starting to assess the effectiveness of these measures. The July 4th edition of The Economist has an article summarizing what is becoming clear.  Extensive testing and tracing of contacts was carried out by the Asian countries earliest affected, China and South Korea. China also locked down Wuhan and largely succeeded to confining the epidemic there. Italy was the earliest European country affected, and it locked down Lombardy on February 22, and succeeded in largely confining the epidemic to the north of the country. Some European countries, Australia and New Zealand locked down hard and very early while there were still very few deaths.  These were the most successful. As were Switzerland, Germany and Austria which locked down while they still had fewer than 60 deaths. Other European countries that waited till they had hundreds of deaths before locking down, such as Britain, were much less successful and the virus spread throughout the country.

The Imperial College modelling group have estimated that Europe’s lockdown policies prevented 3 million deaths by May 4th. The first wave in the USA, which primarily hit New York and New Jersey, was fairly successfully contained as in the European countries, but other states which had not closed their borders or successfully reduced the spread of the virus, opened prematurely and the US is now facing a runaway growth in new cases and deaths (see my previous post).

The country plots below show that it only takes about 5-7 weeks of strong interventions to get rid of the majority of cases. Taking half-measures as the US has done does not work. Particularly when the President repeatedly contradicts the advice of the public health experts and refuses to provide national guidance.

A couple of months ago, I was producing country plots of time trends in cases and deaths to see how the epidemic was evolving across the world. Since then, a very nice site  https://www.endcoronavirus.org/countries has been doing these plots and updating them almost daily. The site groups countries into three groups: (1) those that are beating Covid-19, (2) those that are nearly there, and  (3) those that need to take action. The plots show new cases per day averaged over the last week and each graph has been normalized so all the peaks are the same height. This better shows the trend in the data and the degree to which the epidemic is being controlled, though not the relative magnitudes of the epidemics in different countries.

I’ve selected the plots for some countries of interest to me, to show differences in the impact of control measures in the three groups of countries, using data up to 4 July. The trends in some countries in the second group look quite similar to those in the first. The reason they are still in the second group is that the total number of new cases per day is higher that in the first group, and that can allow the epidemic to still escape control fairly easily.

Some countries that are beating Covid-19 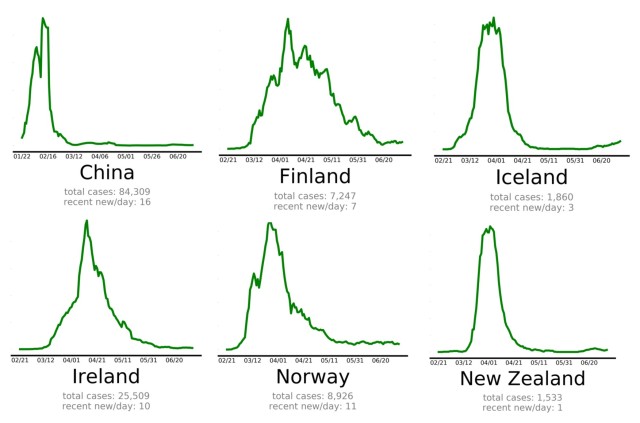 Some countries that are nearly there 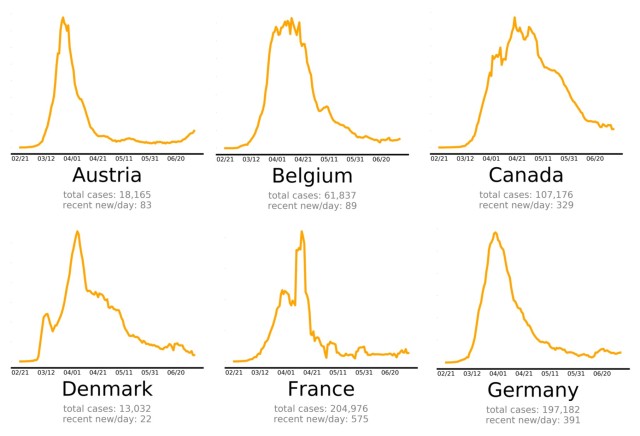 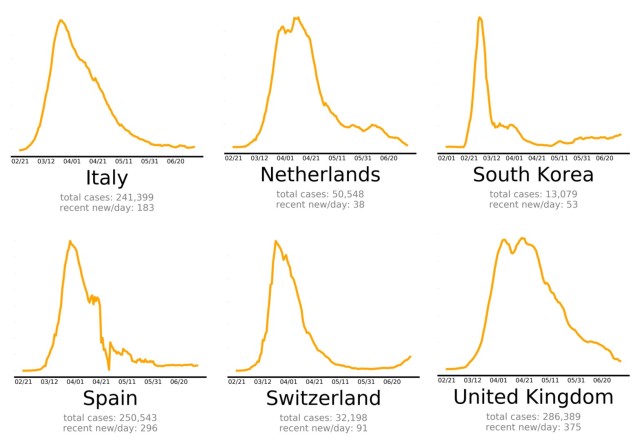 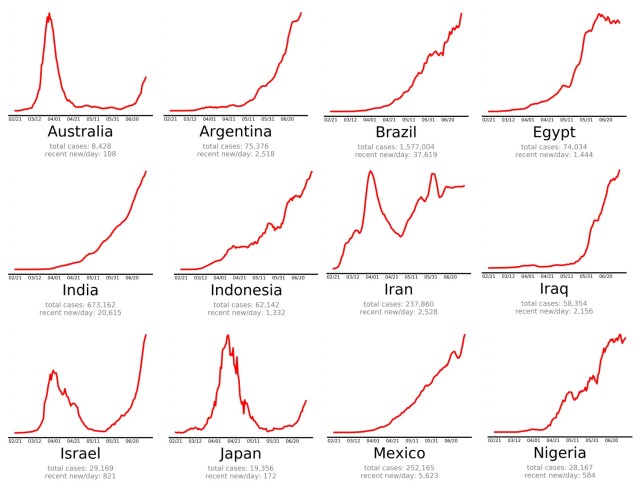 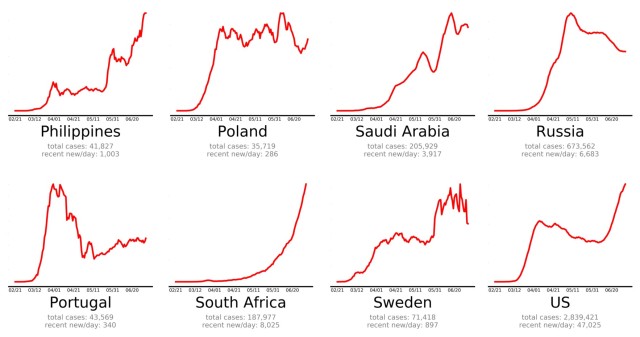 This entry was posted in Global health trends and tagged coronavirus, COVID-19, pandemic. Bookmark the permalink.

1 Response to Covid-19: which countries are succeeding and not succeeding?