Are humans heating up the world?

I was in Australia over Christmas-New Year period and the southern parts of the country were sweltering in a heat wave. Yesterday, the Australian Bureau of Meteorology issued its 2018 climate statement, revealing a record breaking run of rising temperatures. The graph below shows average Australian temperature by year relative to the 1961-1990 average temperature. 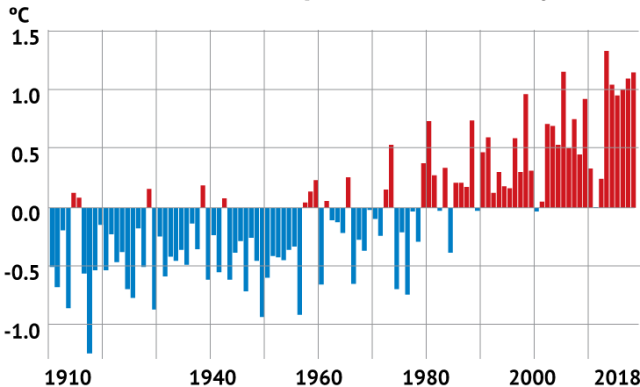 The average maximum temperature for the country as a whole was particularly warm, 1.55 degrees Celsius above the 1961–1990 average, making 2018 Australia’s second warmest year on record for daily high temperatures. Nine of the ten warmest years on record have occurred since 2005. These rising temperatures have been accompanied by drought, bushfires, and the death of half of the Great Barrier Reef.

I was astounded to read the comments to an article in the Sydney Morning Herald on this, where many commentators expressed complete disbelief that the climate was changing, or that humans were responsible, or indeed that the science was settled and not in dispute. A recent major report by the Intergovernmental Panel on Climate Change https://www.ipcc.ch/sr15/  stated that human activities are estimated to have caused approximately 1.0°C of global warming above pre-industrial levels, with a likely range of 0.8°C to 1.2°C. Global warming is likely to reach 1.5°C between 2030 and 2052 if it continues to increase at the current rate. Achieving the global greenhouse gas emission targets set in the Paris Agreement will limit global warming to below 2°C this century.

The report also makes clear that limiting warming to 1.5°C will have huge benefits compared with allowing temperatures to surge to the 2°C level. But keeping to 1.5°C would require aggressive action to curb greenhouse gas emission, going further than the targets set in the Paris Agreement. Even if nations could achieve that, the world would look very different: entire ecosystems could be destroyed across more than 6% of the earth’s land surface, sea levels would rise between half and 1 metre, and 70–90% of coral reefs would disappear. Moreover, sea levels will continue to rise for centuries, with projected long term increases in the range 3-13 metres.

The  most important greenhouse gas is carbon dioxide, and the Keeling Curve summarizes the global accumulation of carbon dioxide in the earth’s atmosphere. It is based on continuous measurements taken at the Mauna Loa Observatory on the island of Hawaii from 1958 to the present day. The curve is named for the scientist Charles David Keeling, who started the monitoring program and supervised it until his death in 2005. 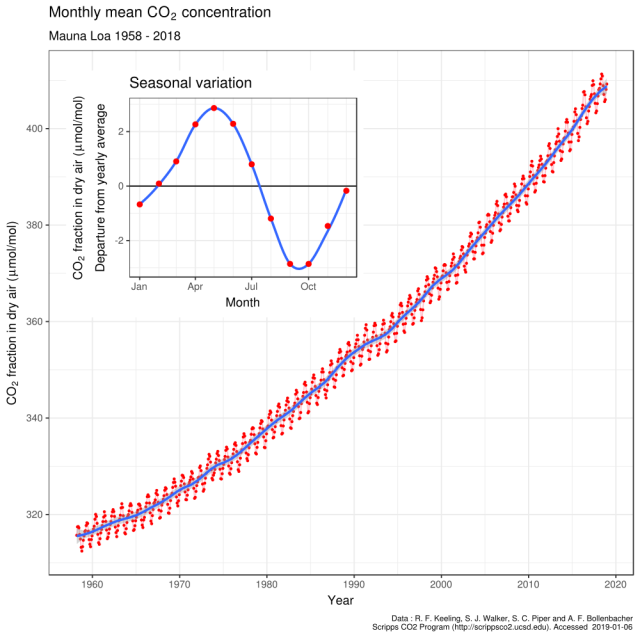 This is one of the most important scientific results of the 20th century. It was the first significant evidence that carbon dioxide levels in the atmosphere were rapidly increasing, and in a very real sense it continues to track our performance as a species. The curve continues to rise steadily at an undiminished pace, and is a stark indictment of a species that is ready to stand by as islands submerge, coastal lands flood, human habitats burn in wildfires, entire ecosystems disappear, species extinction accelerates, and coral reefs disappear.

Data from Antarctic ice cores has enabled levels of carbon dioxide to be measured back to 800,000 years ago. The graph below shows 800,000 years of CO2 data, based air bubbles trapped in ice cores. It shows that CO2 hasn’t ever been greater than 300 parts per million, with very slow and cyclical increases and decreases about every 100,000 years. Today it’s over 400 ppm, 33% higher than it’s been in 800,000 years, and on a very sharp upwards trajectory. 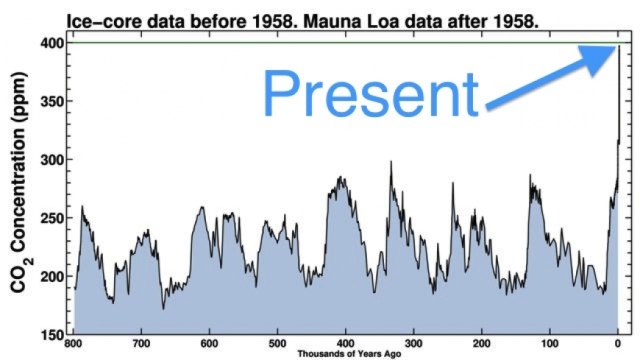 A 2009 study, published in the journal Science, analyzed shells in deep sea sediments to estimate past CO2 levels, and found that CO2 levels have not been as high as they are now for at least the past 10 to 15 million years, during the Miocene epoch.This was a time when global temperatures were substantially warmer than today, and there was very little ice around anywhere on the planet. And so the sea level was considerably higher — around 100 feet higher — than it is today.

With global CO2 emissions continuing on an upward trajectory that is likely to put CO2 concentrations above 450 ppm or higher, it is extremely unlikely that the steadily rising shape of the Keeling Curve is going to change anytime soon. Particularly, as the United States has repudiated the Paris Agreement and started dismantling climate change regulations. Australia also recently abandoned emissions targets or any policy to address climate change, effectively also abandoning the Paris Agreement https://www.nature.com/articles/d41586-018-06675-9

National emissions have risen each year since 2014, when the Australian government repealed laws requiring big industrial emitters to pay for their emissions. There are also no significant policies to reduce the other major sources of pollution, such as transport, agriculture, heavy industry and mining, which together generate nearly two-thirds of Australia’s carbon emissions. Australia’s conservative government has rejected four national climate policies since it was elected in 2013, and rejection of climate change policy arguably played a role in the abrupt replacement of then Prime Minister Malcolm Turnbull by a climate sceptic Scott Morrison.

The Australian government refusal to act on emissions is completely out of line with public opinion, with a recent poll finding that 68% of respondents wanted domestic climate targets in line with the Paris Agreement. Australia is among several industrialized nations that are not on track to reduce greenhouse gas emissions to keep global warming below two degrees Celsius as the Paris accord promises, according to independent analyses.

Australian climate change denialists, including the Murdoch-media, continue to claim that the science is in dispute. An oft-quoted statistic is that 3% if climate scientists don’t think that human-caused global warming is real, often followed by a claim that the 97% who do think so are involved in some vast conspiracy or have vested interests (shares in solar panel companies perhaps?).  If 3% of climate scientists really think that anthropogenic global warming is not real, then perhaps there possibly are real uncertainties about the science.

So is the 97% figure an urban myth or real?  The figure actually comes from a 2013 article in Environmental Research Letters by Cook et al. titled “Quantifying the Consensus on Anthropogenic Global Warming in the Scientific Literature.” They reported that “Among abstracts expressing a position on AGW, 97.1% endorsed the consensus position that humans are causing global warming”. The 97 percent figure went viral and, not surprisingly, the qualifying phrase “expressing a position”—the fine print, —got dropped. Most of the remaining 3% did not express a position, very different from a climate-sceptical position. A more recent review of abstracts from 2013 and 2014 (the_consensus_on_anthropogenic_global_warming) found that of 24,210 abstracts of papers on climate change, only five explicitly rejected human role in global warming. As two of these papers were by the same author, the final figure for scientists who publish on global warming and reject a human causative role is 1 in 17,352 or 0.006%. This is probably as close to unanimity as humans are capable of.

Does this mean the projections quoted above are exact? Of course not. I know perhaps more than most that projections are uncertain, sometimes highly uncertain, and there are plenty of arguments within the literature about the details and impacts of global warming.  Whether scenario X or Y is likely optimistic or pessimistic, whether the sea level will rise more than half a metre by 2100 etc etc.  But none of this means there is not a very strong consensus on the big picture, the need to act now, and the likely implications of not acting strongly enough.

2 Responses to Are humans heating up the world?