I’ve been involved for nearly 20 years in the estimation of global, regional and national causes of child death under the age of 5, in collaboration with academic researchers and a number of WHO technical departments (new-estimates-of-the-causes-of-child-death-under-age-5).  This collaboration has just published a paper in the Lancet extending this work to state level for India:

Li Liu et al. National, regional, and state-level all-cause and cause-specific under-5
mortality in India in 2000–15: a systematic analysis with implications for the
Sustainable Development Goals.

India had a population 1.35 billion in 2018 and the larger states are bigger than most of the world’s countries. If Indian states were countries, five of them would be among the 20 largest countries in the world. Uttar Pradesh is similar in size to Brazil or Indonesia, and Maharashra and Bihar are similar in size to Japan or Mexico. The map below graphically illustrates the size of Indian states by labelling them with the names of countries with similar population sizes. 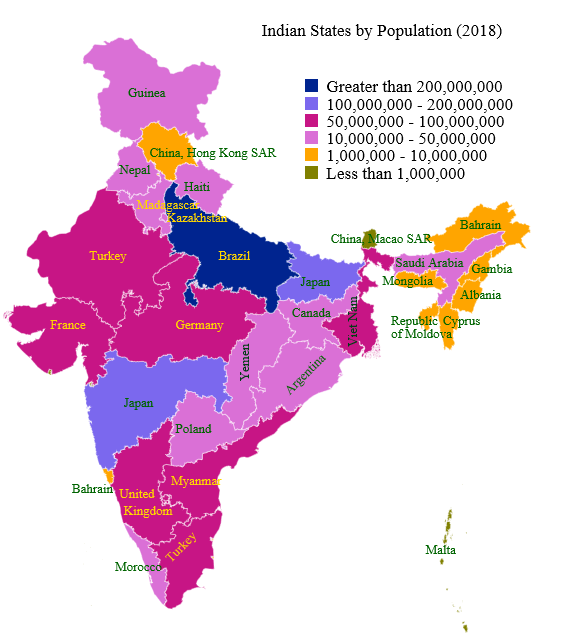 The paper presents estimates and trends for causes of death in children under 5 in India  for the 23 of the 29 states, together with smaller states grouped into two categories. In 2015, there were 25 million livebirths in India and 1·2 million under-5 deaths (under-5 mortality rate 48 per 1000 livebirths). 0·7 million (58%) of these deaths occurred in the first month of life (neonatal period). This quite a contrast to the rest of the world, for which 45% of under 5 deaths occurred in the neonatal period, and India is characterized by a substantially higher proportion of deaths associated with preterm birth (25% of all under 5 deaths, see figure below).  Low birthweight deaths, as reported by the Million Deaths Study, were even higher, due to high numbers of deaths in full-term low birthweight babies.

The paper is the result of a collaboration between the Maternal and Child Epidemiology Estimation (MCEE) group, WHO staff, and the Million Death Study (MDS). The MCEE group, lead by Professor Bob Black and researchers at Johns Hopkins University, is funded by the Bill and Melinda Gates Foundation (MCEE).

India had the largest number of under-5 deaths of all countries in 2015, with substantial subnational disparities. The child mortality rates in 2015 ranged from 9.7 deaths under age 5 per 1,000 livebirths in Goa to 73.1 deaths per 1,000 livebirths in Assam. Overall, child mortality rates were lowest in the south and highest in the northeast of India. In 2015, India was ranked 158th out of 194 countries for child mortality. The graph below shows the rankings against countries of the Indian States, if they were treated as countries. Goa would have ranked 66th out of 218 “countries” and Assam 194th (or 25th worst). 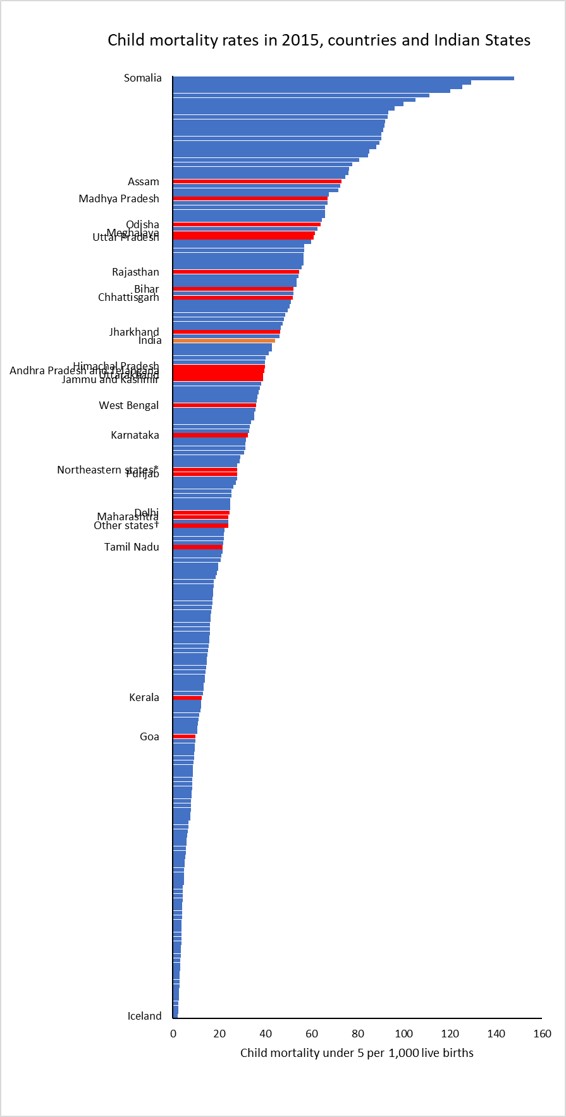 India has made a sustained effort in recent years to increase vaccination coverage for children.  The national coverage for the first dose of vaccine against measles has risen from around 56% in 2000 to 88 % and that for the second dose of vaccine against measles from under 25% t0 77%.  Measles deaths in India have declined from around 90,000 in 2000 to 20,000 in 2017.

The number of child deaths under 5 reduced from 2·5 million in 2000 to 1.2 million in 2015,  yet despite this progress, India did not meet target 4 of the Millennium Development Goals (MDG 4) of a two-thirds reduction in under-5 mortality rate between 1990 and 2015.  In the post-MDG period the UN Sustainable Development Goals (SDG) target for child mortality is to achieve ≤25 under-5 deaths per 1000 livebirths and ≤12 neonatal deaths per 1000 livebirths by 2030. The paper concluded that ten major states must accelerate progress to achieve the SDG under-5 mortality target, while 17 are not on track to meet the neonatal mortality target. Efforts to reduce vaccine-preventable deaths and to reduce geographical disparities should continue to maintain progress achieved in 2000–15. Enhanced policies and programmes are needed to accelerate mortality reduction in high-burden states and among neonates to achieve the SDG child survival targets in India by 2030. 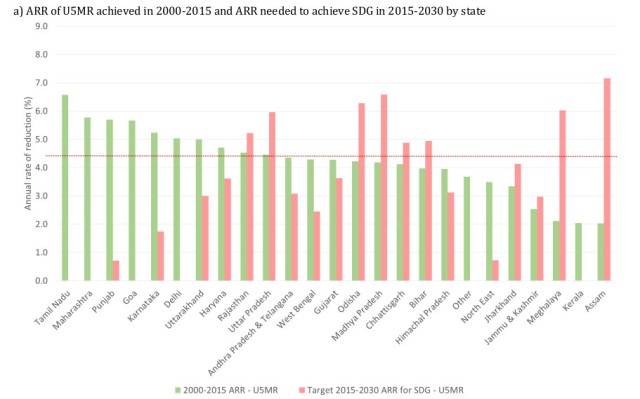 If the average rate of decline in child mortality from 2000-2015 is sustained unchanged until 2030, how would the Indian States compare with the countries of the world in 2030?  The tables below show the change in global ranking (Indian States and other countries) for the five best and worst Indian States in 2015 and 2030.  The paper provides more detailed analysis of State-level trends in specific causes of child death to help identify areas where more efforts are needed to achieve the SDG target for child mortality for India. 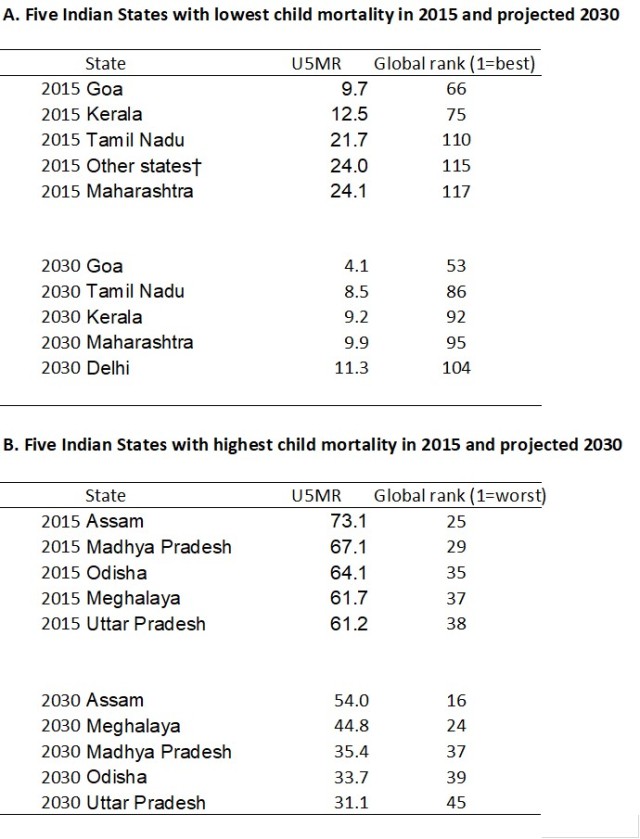