Posted on August 9, 2020 by colinmathers

In a previous post, I examined variations in cultural values across 105 countries in year 2019 using data from all 7 waves of the World Values Survey (WVS)and all 5 waves of the European Values Survey (EVS) [1-4]. I developed an improved method for estimating latent variables f1 and f2 for two dimensions of human values: a traditional values (parents,state, religion) versus secular values dimension and a survival values versus emancipative values dimension. These two dimensions were defined for earlier waves of the WVS and EVS by Inglehart and Welzel using factor analysis.

The regression procedure described in the previous post (for projections to 2019 for all countries) was also used to interpolate a complete time series for each country from 1980 to 2020. For some countries where f1 and f2 varied substantially across waves, the time trends were not smoothly varying. I thus applied a Loess regression with bandwidth 0.5 to smooth trajectories to a moderate degree. Using 10 “culture zones” defined by Welzel to group countries, I computed population-weighted averages of f1 and f2 for the culture zones and these are shown in the Figure below.

Some of the kinks and twists in these trajectories relate to variation in f1 and f2 across waves for some individual countries.  The following graphs illustrate the cross-wave trends for selected countries. 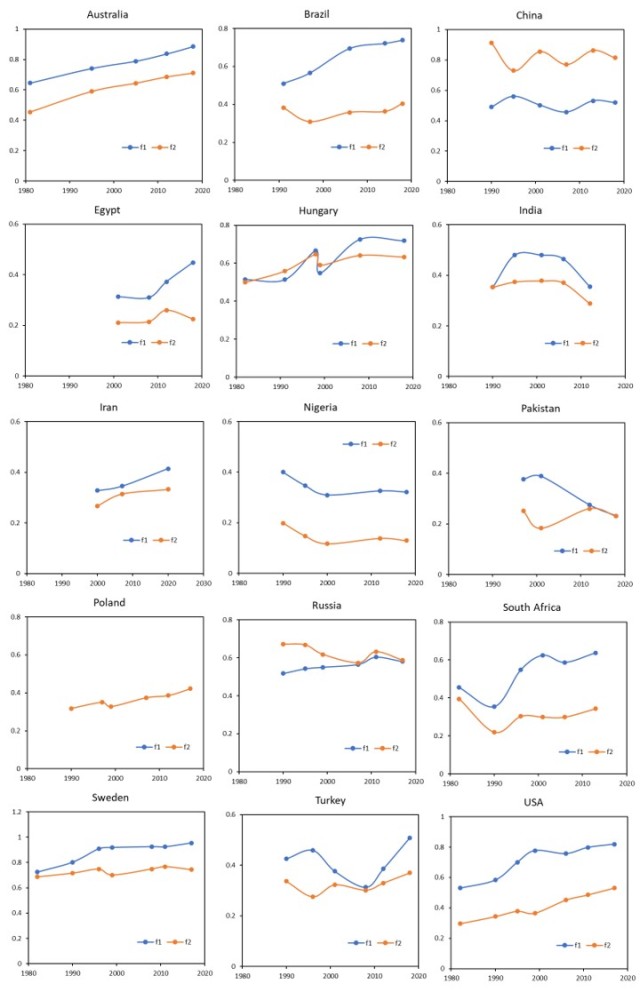 There are some countries where values are reasonably smoothly evolving apart from a single wave (eg. Hungary) and others where value vary substantially up and down across waves (eg. China, Turkey).  It is possible some of these represent real changes in cultural values over time, but also likely that in many cases it reflects variations in survey quality and representativeness. To get a better idea of the extent of this issue, I summarized the net deviations of intermediate waves values of f1, f2 from the values obtained by carrying out the covariate regression described in the previous post and adjusting its predictions so they ran through the first and last wave values for f1 and f2.

Net deviations were calculated in f1-f2 space as the distance between the survey wave values and the regression-based values. The root mean square deviation δ for all intermediate waves was calculated by country. The following table shows the percent of countries within each culture zone with δ > 0.12 (a value one standard deviation above the mean δ for all countries).

It is clear that there are much larger deviations from smoothly evolving time trajectories in developing regions (except the Sinic East) than in high income regions with the exception of the Old West. It seems to me highly probable that most of the larger deviations across waves are likely due to variations in survey implementation, sampling and quality. Various factors such as lack of good population data to establish sampling frames, language translation issues, interviewer training, difficulties in finding funding, and security issues in some countries, can all contribute to systematic differences across surveys.

The following graph bypasses these issues of comparability across waves to show the net trend in culture values from 1980 to 2020 as straight lines joining those two points.

This graphs shows a very clear contrast between the evolution of cultural values for the West plus Latin America and the other culture zones. The West regions and Latin America have all moved quite strongly towards more emancipative values and also away from traditional values to more secular-rational values. In contrast, while the other regions have also moved somewhat rightward in emancipative values, they have moved downwards away from secular-rational values towards to more traditional values. The Islamic East is the major exception with very little change in either dimension.

In his 1996 book, The Clash of Civilizations and the Remaking of the World Order, Samuel Huntington described a global revival of religion in the second half of the twentieth century (La Revenche de Dieu) claiming that the trend towards secularization went into reverse in the 1970s in every region of the world [5]. At least to the extent the second latent dimension (or indeed Inglehart and Welzel’s traditional-secular factor) measure the degree of secularization, the trends from 1980 to the present do not fit with his conclusion. He is correct in identifying a return to religion in the former Soviet countries with predominantly Orthodox Christian or Islamic religious tradition. He also points to an increasingly Hindu orientation of India, whereas the story from the WVS-EVS data is somewhat more complex with a fairly stable level of religiosity (f2) from 1990 to 2000 associated with an increasing level of emancipative values, but from 2000 to 2020 an increasing degree of religiosity associated with a declining level of emancipative values. This correlates broadly with the rise of Hindu extremism and the election of the BJP Party with its Hindu nationalist orientation in 2014.

As a result of this initial analysis, I plan to revisit the conceptualization of latent culture variables in order to develop clearer operationalizations of important culture dimensions such as religiosity/secularism that make better use of more of the data collected in the WVS. I will also look at developing better methods of extrapolating and interpolating time series for countries with considerable deviations across waves, either by leaving out a single deviant wave, or perhaps by more broadly averaging across the waves. And perhaps, to revisit the grouping of countries into culture zones.